As the eldest of the three, Herman III is the unofficial leader of the group, bringing passion and joy to their work. Herman, who is 18 years old and a Freshman at Morehouse College in Atlanta, GA on a full academic scholarship. He graduated in May, 2018 with a 4.6 GPA Summa Cume Laude. Although, away from home as he embarks on his time and experience at college, he continues to have a close bond with his brothers and perform as TGB.
Being a part of TGB has brought many opportunities to meet other performers in the entertainment business. In September 2016, Herman’s parents threw him a sweet 16 party that would put most Sweet 16 parties on MTV to shame. Arriving in a Rolls Royce, he performed on stage with special celebrity guests Bryshere "Yazz The Greatest" Grey and Bre-Z from the hit tv show Empire. He wowed his fellow classmates and friends with an amazing performance and spent the rest of the party celebrating with everyone.

Thoughtful. Supportive. Confident. Kind. Talented and considered one of the best dancers. Just a few ways Edwin, the second oldest of the Gore brothers, has been described. Edwin’s creativity and willingness to push boundaries with TGB’s sound brings a freshness to the group. At 16 years old, Edwin is mature beyond his years and brings that maturity to their performance. In March 2019, Edwin's parents threw him a sweet 16 birthday party where he arrived in a McLaren and he performed with celebrity guests Ayo and Teo. During the party, The Gore Boyz announced its new record deal with Equity Distribution LLC a company owned by Rock Nation Records, an event which was attended by the company's representatives.
Edwin is a Sophmore in High School. He is a part of the National Honor Society and a member of the Beta Club as well as a member of the Jack and Jill of America Organization. He recently won all conference in Track & Field and Swimming. When he’s not studying or practicing his guitar, you can find him playing videos games, basketball, swimming and spending time with his brothers and friends.

Sean-Michael, the youngest of the group, has proven his talent and skills at every possible level and showed that he is fearless and will seize every opportunity to reach his dream of being an entertainer. Sean-Michael started singing and performing when he was only three years old. From performing with his brothers at local restaurants and venues to taking the stage at large arenas, there is nothing too small or too big for Sean-Michael.
Sean-Michael is now an eighth grader in middle school where he is in AIG (academically and intelligently gifted), Career all A's and President of his school. He is also a member of the Jack and Jill of America organization. He auditioned for Berry Gordy the founder of Motown Records to play the young Michael Jackson in the Motown Musical and was told that he would be a “superstar one day”. His middle school recently won State Championship in Basketball and Soccer. He is also involved in AAU basketball, swimming, and of course singing and dancing. 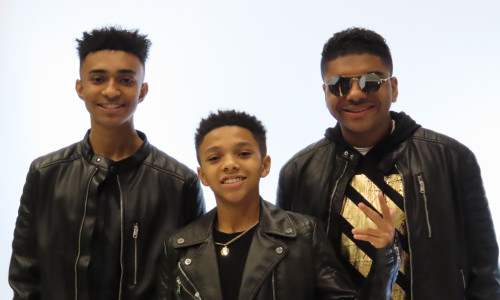